Traveling through Costa Rica might have been one of the most amazing experiences I have ever had.  We had basically nothing planned except roundtrip tickets bought on cyber Monday, a rental car, a map, and the Air BnB booked for the first night.  We were ready for an adventure of a lifetime!

We left from LAX and landed in San Jose.  We got off the plane and stepped into a humid environment we were not used to but excited to explore.  After much confusion in the Costa Rican airport, we were shuttled to the rental car company and got our little “4×4” Terios, weirdly, next to the EuropCar was a Walmart so of course that was our first stop.  This Walmart was so different it sold motorcycles and banana chips, things we have never seen before.  We stopped in and bought gallons of water, some snacks, some local alcohol and went on to our next stop.  The one thing we actually had planned was a $15 Airbnb in the middle of the city of San Jose since we landed late and didn’t want to drive at night to our first real destination.  The Airbnb was IMPOSSIBLE to find because there were no addresses or street names, the directions that were given to me by the couple running the Airbnb were, “across the church and adjacent to the car dealership”.  I am sorry what…  We drove around for hours trying to find this little nook.  The only reason we did was because I guessed on a house that had a funky lock box, I tried the combo that they gave us and thank god it opened! The Airbnb also didn’t end up being a private, it was a shared living room and bathroom with different locked rooms with an air mattress… Needless to say our first night was going well.  At least we had some local Costa Rican rum to make the air mattress a little more bearable.

From San Jose we drove to La Fortuna.

We made many pit stops on the drive over to La Fortuna. We stopped on the side of the road for breakfast at this shack looking place.  We were skeptical but wanted to give it a shot.  I will never forget in the middle of nowhere off the highway in Costa Rica that I had the best eggs with ham in the entire universe.  We also stopped at and went zip-lining through the jungle! It was insane, we zip lined for two hours in the dense jungles on our way to La Fortuna.  A pit stop of our zip line included a giant Tarzan swing.  I screamed so loud that all the birds in the surrounding area flew away! This swing was like a catapult over the forest and river.  They even set up a mile long line that you got to soar through (bottom right photo) were they gave us full body harnesses and made us fly over the jungle.  I was literally crying in the beginning because of how scary it seemed.  The guides in charge laughed and pushed me off into the distance as I screamed, “OH MY GOD”. 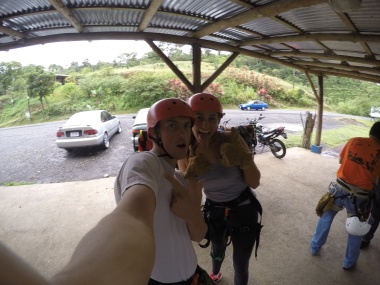 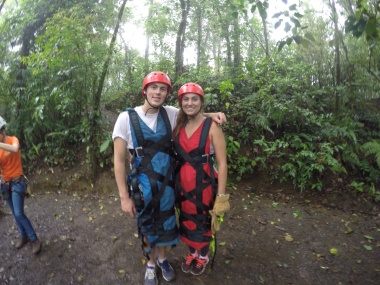 Once we reached La Fortuna we stayed in the coolest hostel Arenal Backpackers, the first night we stayed in a private room (roughly $50) the second night we decided to try something different and stayed in the tents ($12 per person) that the hostel has. 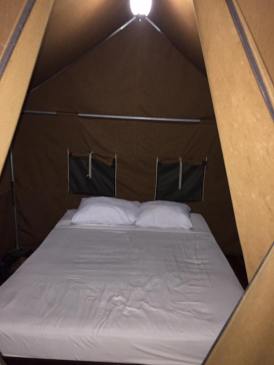 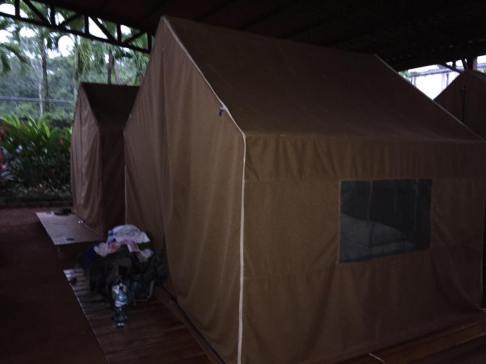 This hostel had it all fun nightlife, good food, safe environment for travelers, a pool with a slack line across, hammocks, & a poolside bar.  We only planned on staying there one night but we fell in love with the atmosphere of La Fortuna and wanted to spend another night there.  While we were there we found a cool spot down the street where you could swing into the river with a beautiful waterfall backdrop.  This place was amazing!  If you head that way definitely take the time to swim in the river on the right of the road!

After our first day of zip lining and waterfall jumping we decided to hike to La Fortuna waterfall & then to Cerro Chato the crater located next to the Arenal Volcano.  The hike to La Fortuna wasn’t too bad it was a paved staircase that was about 3 miles round trip with a beautiful reward.  I would suggest doing both of these in one day because they are literally right next to each other, they both cost money so be prepared.

The hike to Cerro Chato might have been hands down one of the hardest but coolest hikes we have ever encountered.  It was harder than half-dome in Yosemite… It was muddy steep and raining in the dense jungle.  We hiked Cerro Chato in a little over an hour in 90 degree and humid weather.  Cerro Chato is 3,740 feet it was some incline! 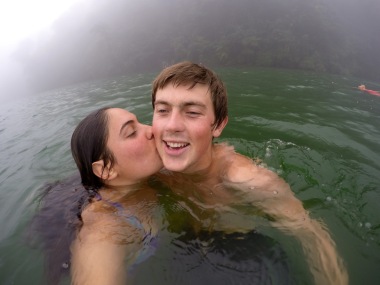 We swam in the ancient crater, it was actually so creepy.  The fog was dense so you couldn’t see the other side of the lagoon.  I was also scared because of how old it was, I was thinking I wonder what ancient animal is swimming underneath me.  But, it was an amazing experience to be able to swim inside an erupted volcano’s lagoon.  After this incredibly strenuous hike, we found some of the hot springs that were heated by La Fortuna.  The hot springs in La Fortuna all cost money and are pretty pricey but, you can walk up a canal into the blocked off areas and hop a small fence to enjoy such an amazing experience.  Sneaking into those hot springs was amazing.  We had our sangria and relaxed in the hot water while it slowly started to rain.  Out of nowhere it started a torrential downpour and we were in the hot springs during what was like a flash flood storm and it was surreal.  A great way to relax after a gnarly muddy hike.

We drove all the way from inland Costa Rica to the shores of Playa Del Coco.  During the drive we encounter that Costa Rica had a whole lot of nothing in the middle, similar to driving from Los Angeles to San Francisco on the 5.  Our original plan was to go to Playa Hermosa but, there wasn’t much there and we hadn’t found a place to stay yet.  We drove to Playa Del Coco and there was a lot more to the town.  We searched hostels and Airbnb and found a quaint Airbnb just a few steps from the ocean.  This Airbnb was around $20 a night for the both of us.  Yes, I said $20’s and beachfront! Right when we unpacked we walked around the cute little town that had great happy hour prices.  One of the beach front bars had swings!  We explored the beach and relaxed! 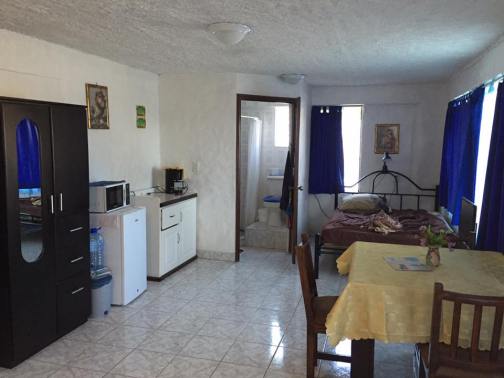 We discovered the most amazing beach.  Playa Del Ocotal was a small beach that we found trying to find a dive shop to book an excursion.  Rocket Frog Divers was located right on the water of Playa Del Ocotal.  I am so grateful for trying to find that dive shop because after we booked our excursion for the next day we ended up snorkeling the clear blue waters, soaking up the sun on the amazing beach, swimming some laps, and ending the day with a sunset soak in this huge tide pool that was created during low tide.

We went diving with Rocket Frog Divers on their dive boat.  It was such an awesome experience and they had such amazing customer service.  We loaded up the dive charter and started our day.

On this dive we saw a lot of cool schools of fish, a large ray, and some crazy thermoclines.  I had never physically seen what different temperature water did when it was mixed.  It was like looking through a fuzzy glass.  We dove at two spots and it was honestly so much fun.  I wasn’t expected the visibility to be amazing because we were on the pacific side but, it was still a chance of a lifetime.  When we got back from the boat that day we decided to have a sunset dinner picnic on the beach.  Garrett and I shared a bottle of wine and some tasty supermarket empañadas with delicious sides.  Important tip, take advantage of the amazing but, cheap food in the Costa Rican supermarkets. 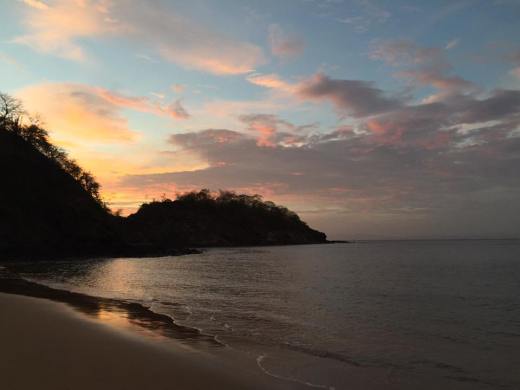 From Playa Del Coco to Malpais

This was the longest stretch of driving we did the entire trip! Garrett thought it would be more excited to take the dirt back roads.  So of course, we did, it was such a good idea we got to see the tiny villages of Costa Rica from our Terios.  Although it was bumpy and we had to cross a few rivers it was definitely worth it.  On the drive to Malpais we saw so many cute little monkeys.  We also were a few miles into this dirt road and out of nowhere there was a soccer field and what looks like a super competitive game going on. 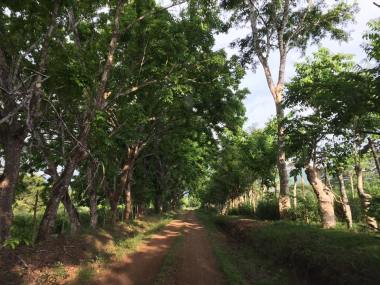 Once we finally arrived at Malpais it ended up being the coolest beachiest town ever.  Stay tuned for part two of the Costa Rica Adventure!!!

Remember get out there and go do something!

I am from Los Angeles and I love to explore. I am always looking for fun new active things to do and want to share those things with you! View all posts by insanelane

Find Your Next Adventure: